Jean – April Resident of the Month 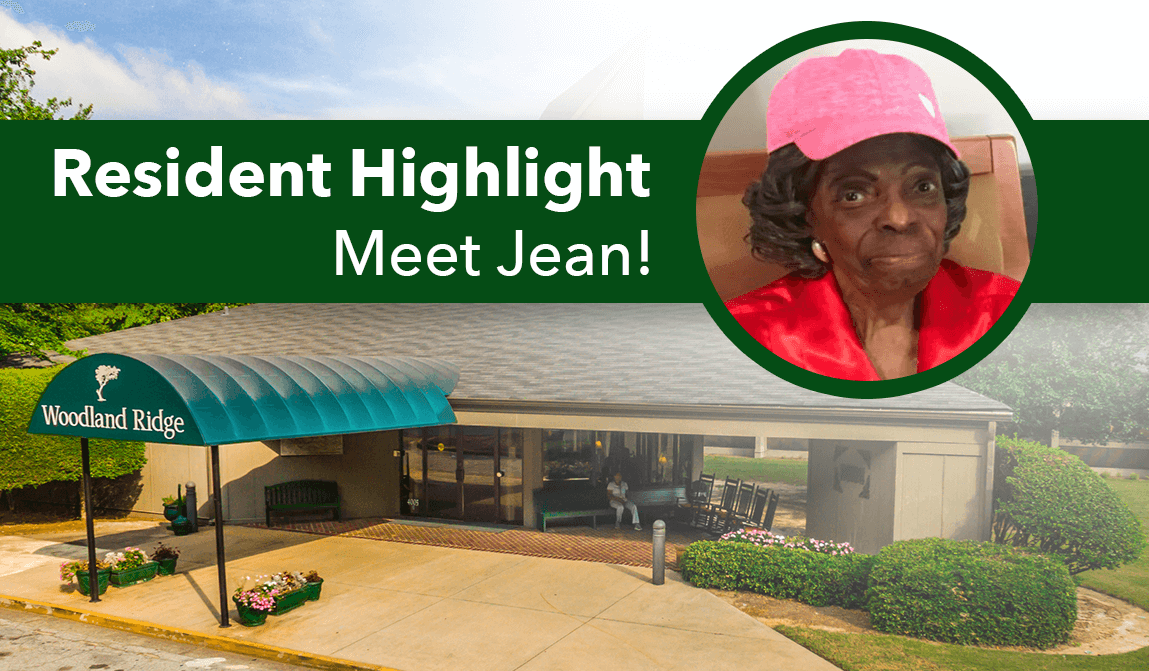 Woodland Ridge‘s April Resident of the Month is Jean! Ms. Jean was born in Newnan, Georgia. When her mother died, Jean was only three years old and came to live with her Grandmother in Atlanta. She says she was protected and well cared for by her Grandmom, who made sure Jean went to a private school.

Ms. Jean remembers her Grandmom was a great cook that made big dinners each year for Jean’s birthday, inviting all her school friends, and their families. Jean went on to attend Clark Atlanta University and graduated with a Bachelor’s Degree in Education. During her time in college, Ms. Jean loved dancing and danced professionally at the fraternities and sororities.

It was while Jean was dating a young man who went to Atlanta University that she met her future husband, Roscoe. As the story goes, Roscoe was working at the front desk of the dormitory when Jean went to call on the young man she was dating. Roscoe asked her who she was and where she went to school. Later when he called her to ask her on a date, Jean asked how he got her number, and Roscoe said he told the people at Clark Atlanta University that he was her cousin and had lost her number. Since he was just out of the Army, they believed him and gave him her number. Ms. Jean says it wasn’t love at first sight, but he could make her laugh. Roscoe graduated from Tuskegee with a Bachelor of Science degree and from Atlanta University with a Master’s of Science degree.

Ms. Jean also dated a neighbor’s son named Henry. When Jean was in a car accident, both Roscoe and Henry showed up at the hospital at the same time with red and yellow roses respectively. Jean says Roscoe spoke up and told Henry, “I intend to ask Jean to marry me.” and if Henry wasn’t serious, he should date someone else. In the summer, Jean went to work at a resort in New Jersey and when she returned Roscoe met her at the airport and got down on one knee to propose. They were married for 50 years before Roscoe passed away and Jean says they never spent even one day apart. They have two sons and three grandchildren that Ms. Jean says she loves unconditionally.

In her career, Ms. Jean taught pre-k children for 12 years, part of that being with the Head Start program. She also worked for a chiropractor as the receptionist and learned how to do the x-rays, too. Ms. Jean says her passion is music. She wanted to be an opera singer but she loves all kinds of music. Another passion is ceramics. The senior center is where this passion started and she did so well with ceramics that she ended up teaching it too. Ms. Jean has always loved to travel. She remembers family trips to Disneyland, seeing a lot of the United States, and going overseas on cruises. She was part of a social club that traveled. One time while on a trip to Catalina Island, their bus got stuck on the ledge and they had to call another bus to come and push them out. Ms. Jean’s daughter is from the Netherlands and Ms. Jean says one of her favorite places is Curacoa, an island of the Netherlands Antilles.

We love having Ms. Jean here at Woodland Ridge She has a wonderful smile and joins right in at our social events.

She says, “I love the Lord and try to walk that path. I try to touch everyone I meet so we can all know Him.”