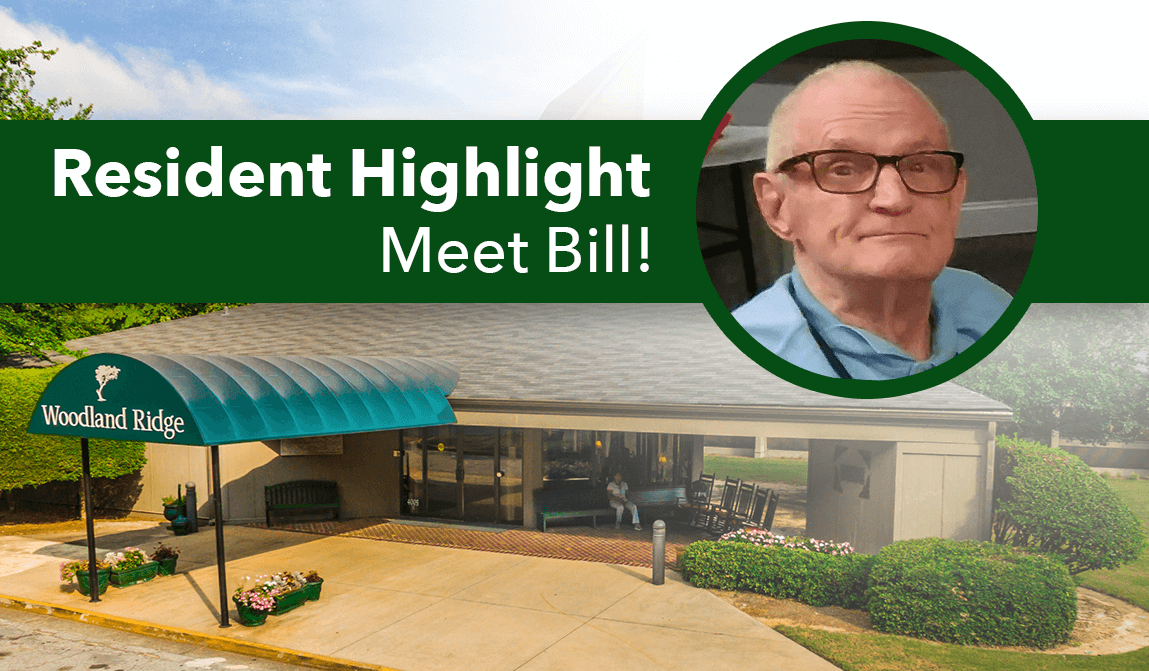 William “Bill” is Woodland Ridge’s resident of the month! Mr. Bill is from Atlanta and grew up in a family with one brother who is four years older than him. Bill fondly remembers their family dog, a dachshund named Baron. He went to North Side High School and then to Emory University where he got a degree in business.

Bill and his older brother joined their dad in his scaffolding business where Bill says he “did a bit of everything.” While working for the family company, Bill went to work in their Miami office for about 3 years. It was in Miami that he met his wife Pam. They’re celebrating 50 years of marriage this year!

Bill and Pam have 2 sons, Bill Jr. who is a computer specialist for Home Depot and Chad who is a lawyer with King and Spalding Law. Both of Bill’s sons went to Emory University too, following in their dad’s footsteps. Bill says he “is the proudest of his family, especially his sons.” Bill also has 4 grandchildren.

When asked if there were any funny stories, Bill mentioned a sheepdog named Muffin. The dog’s full name was GQ Ragamuffin, but he went by Muffin for short. An unusual name for a dog that was so big. One of Bill’s favorite hobbies is swimming! Bill enjoyed going to the Druid Hills Golf Club for the swimming rather than playing golf when he was young. The family had their own pool for many years.

At Woodland Ridge, you can find Bill watching TV or on his computer. He also enjoys going on some of the shopping trips or lunch outings. Bill has been with us at Woodland Ridge since January of 2017! When talking about Woodland Ridge, he says, “It’s comfortable here and I enjoy the people and the meals every day.” Bill often has a smile or kind word for everyone.