June – August Resident of the Month 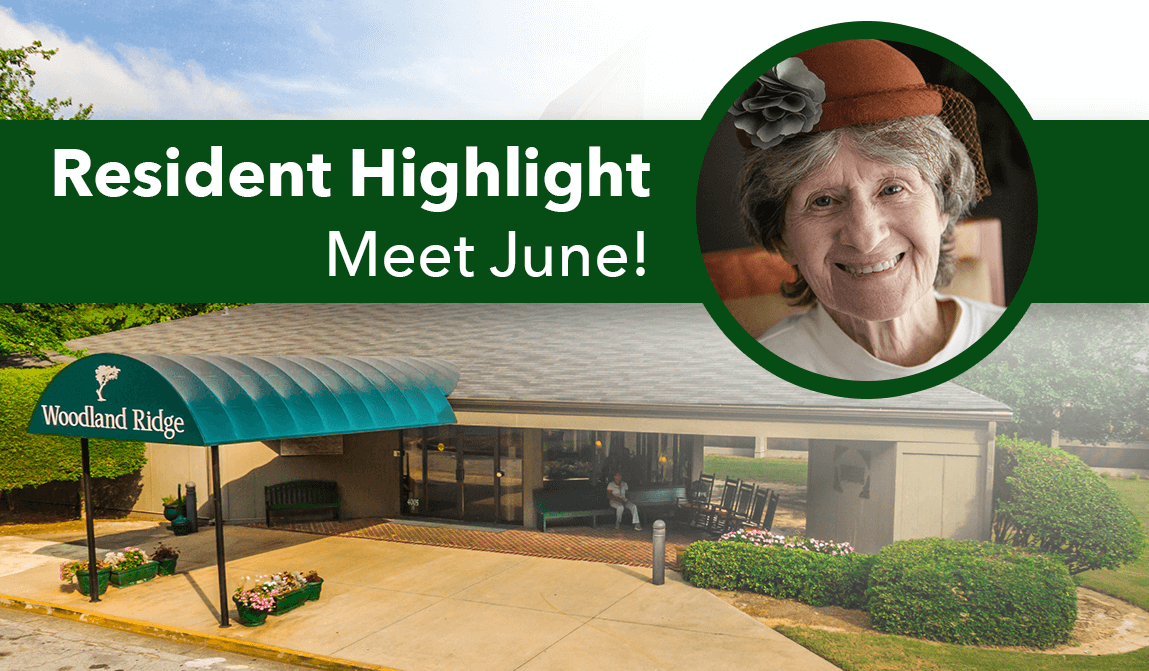 Woodland Ridge’s resident of the month for August is June. Ms. June is originally from Ashland, Kentucky and grew up the youngest of three children, having one older brother and one older sister. A memory from her youth is the time during the Great Depression that she asked for all the bananas she could eat for her birthday, and that’s exactly what she got! Her parents used to rotate among their children as to who got a nickel in their lunch box. Ms. June always looked forward to when it was her turn.

At age 16, Ms. June became a Christian which led her to go to Anderson University in Anderson, Indiana, which is a private Christian school. She got her Bachelor’s in teaching at Anderson, and that’s where she would meet her future husband on the tennis courts. Since they were in Indiana, he drove a Jeep, and there was lots of snow, a favorite date for this couple was to plow through the snowdrifts in his Jeep. Dating was an adventure for these two!

Later, June went on to Morehead State University for her Master’s degree and her Rank One, which is another degree above Masters. Ms. June spent 34 years as a Second-Grade teacher, earning a spot in the “America’s Who’s Who Among Teachers” and also did lots of youth group work for her church, Meade Church of God. Ms. June and her husband were the youth leaders for their church and loved doing the summer youth camps. Their daughter, Diana remembers how the youth would try to throw toilet paper up the trees, but her parents always had a ready answer like water hoses and June was even known to play pranks on the kids too. Diana says both her parents made summer camp lots of fun.

Ms. June is a very artistic person, playing the piano, autoharp, guitar, and banjo. She loves Gospel music and wrote her own songs and poems. Other churches would request Ms. June to sing and perform her songs after they heard the CD that she made. Another artistic expression Ms. June is known for is the arts and crafts and decorations. Ms. June and her husband always made sure that if there was a need for equipment or supplies that the youth needed, it was supplied by them.

Ms. June lives in our Memory Care neighborhood and loves the pet visits and doing sing-alongs since she knows all the words.  You can recognize Ms. June by her ready smile and sweet personality. We love having her as part of our Woodland Ridge family.