In our employee spotlight this month is Robert Dixon, our marketing director. Robert is originally from Mexico, Missouri and also spent part of his growing up years in Illinois and Iowa. He grew up with 3 sisters and actually helped raise his younger sisters. Robert’s mother was very influential in his taste for service and giving back to the community. 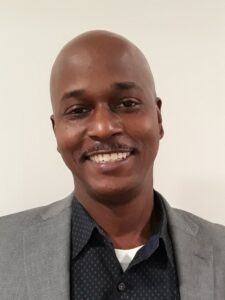 In his teen years his mother introduced him to radio, leading to his becoming the youngest on air radio personality and the youngest Urban Production Director. To give back to the community, Robert started a production company that produced concerts, fundraisers and events. In high school, Robert worked as a radio and club DJ. In 2000 Robert moved to Atlanta for a fresh start. In 2010, he started work as a concierge in a senior community and was a Recreation Director for 9 years before coming to Woodland Ridge.

Robert feels his proudest accomplishment is that he raised his two sons for most of their adolescent lives as a single parent. His son, Rob, has his own production company and is a videographer, working at churches. His second son, D’Marquis, is a salesman. Robert says his favorite hobby is spending time with his family. He also enjoys creative and artistic projects.

At Woodland Ridge you can always count on Robert’s upbeat attitude and his compassion for our residents. COVID has been a challenge in that Robert is the biggest hugger in the building. We now do elbow touches! Robert says he, “doesn’t miss the corporate world and feels the greatest thing about Woodland Ridge is that he can provide for himself and his family while helping and being of service to others.” He feels God blesses him so that he may be a blessing and enrich the lives of others.

We love having Robert as a part of our family!

If you or an aging loved-one is considering a move to an Assisted Living Facility for Senior Care Services in Smyrna GA please contact the caring staff at Woodland Ridge today. 770-431-7055