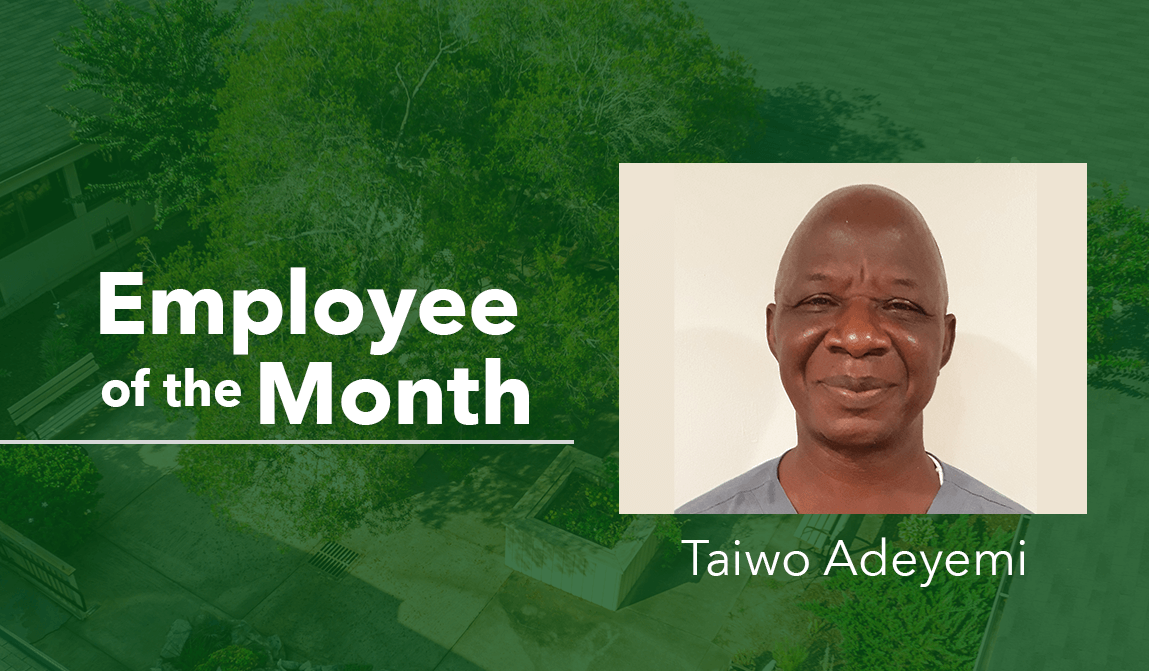 Woodland Ridge is proud to announce our Employee of the Month for October— Taiwo “Tai” Adeyemi! Learn more about Tai and his story here.

Tai is originally from Nigeria and is the youngest of four children, having three older sisters. He said he was a “troublesome” boy growing up who liked to ride bicycles all the time. A funny story he remembers is that he would rent a bike, and when he didn’t return it on time, the owner would take his shirt! Tai’s mother would have to pay the man the extra fee to get the shirt back. Tai would also go swimming in the river without his mother knowing, but the truth came out when he had nightmares about falling in the river.

Tai came to the United States in 1980 and went to Southeastern University in Washington, D.C. He graduated in 1985 with a Bachelor’s Degree in Marketing. Tai then went on to manage a McDonald’s restaurant for six years and then bought his first house in Germantown. He also managed a Hardee’s restaurant for four years before starting his own taxi-cab business in Washington, D.C.

After moving to Georgia in 2003, Tai worked at a dealership buying and selling cars, and then a grocery business for two years. It was when Tai was working in an emissions business that he got his CNA certification. He began working for CaraVita Corporation three years ago and came to Woodland Ridge to help out during the COVID-19 pandemic. He liked it so much that he decided to stay and work here!

Tai is married and his wife is a nurse practitioner at the VA hospital. They have six children: five girls and one boy. His oldest daughter is a doctor, his second daughter is a lawyer, his third daughter is studying medicine at Augusta State University. His son is at Georgia State studying biology, his fourth daughter is a high school senior and his youngest daughter is 13. When asked what he does for fun, Tai replied that he plays the African talking drum at his church and does DJ gigs on the side.

“At Woodland Ridge, there is no trouble. They trust you and let you prove yourself. The people are friendly. I love the people around me.”

Thanks so much for all your hard work, Tai! We’re glad to have you on the Woodland Ridge team!